Humans. Over 6000 languages, but I’ll wager that only German has the *mot juste* to describe the-performance-of-an-action-with-brute-force-whilst-using-the-utmost-delicacy.

Actually it’s not necessary. The Thorens TD 124 is better than any word. 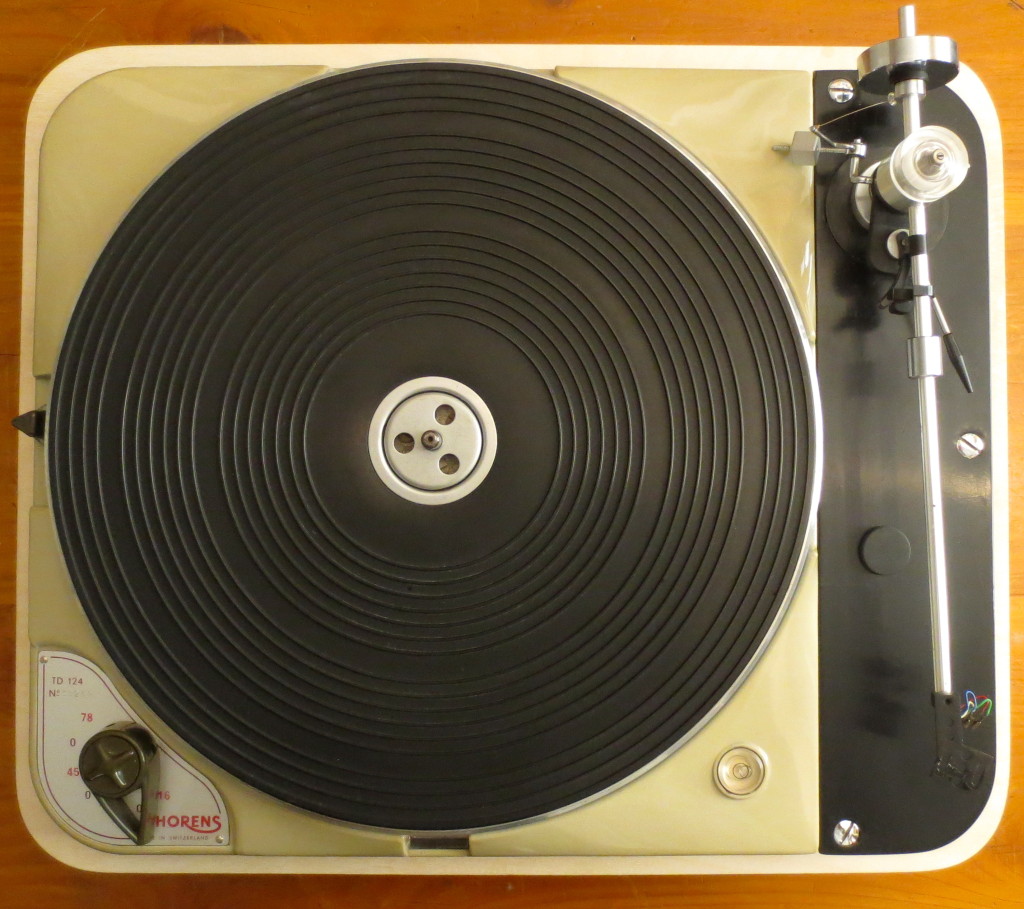 Looking down on a rebuilt TD 124, complete with original armboard and Formula IV Unipivot tonearm. Forty Pounds Sterling (without arm) in the early ’60s……

A cross between a Breitling watch and a combine harvester, the TD 124 is another of the Great Tables. To dissect this spinner is to witness problem-solving Swiss-Style, and can only engender respect in the viewer (and listener…) 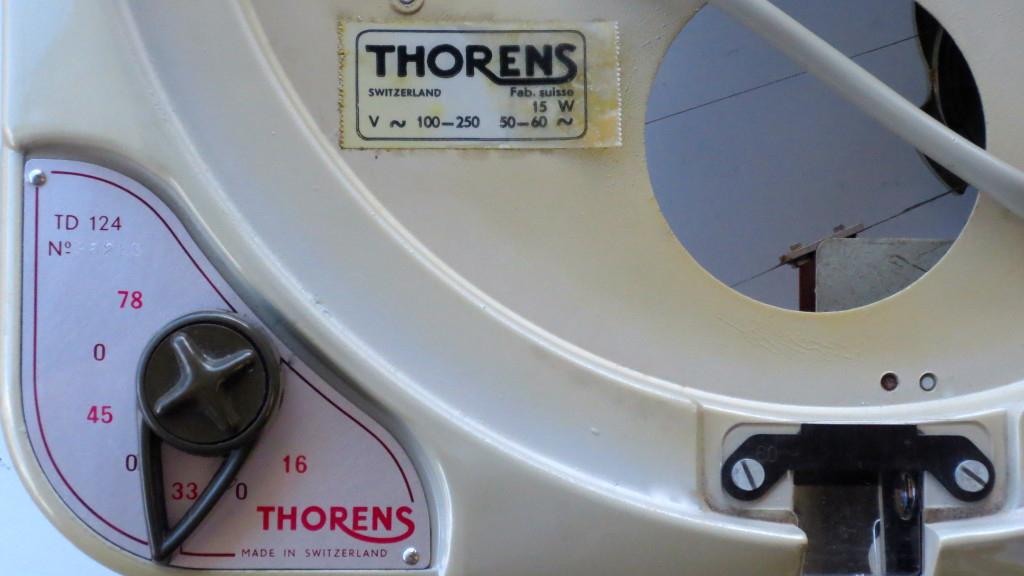 TD 124 Mk 1, Serial#38259. In the centre of the lovely chunky speed selector we see the star-shaped fine speed control wheel. Note the range of voltages and frequencies that can be achieved!

Underneath its beautifully rounded cast frame there is much to describe. What follows is necessarily brief.

It’s an idler drive. But not any idler drive. Unlike the legions of cheaper idlers this one was built to be the best. Almost sixty years later many of us still think it’s just that.

A top-down approach reveals that there are not one, but two platters. The topmost is a relatively lightweight affair, aluminum with an attached rubber mat and captive 45RPM large hole adapter sprung in place. Underneath this is a simply massive cast platter sporting a superbly machined and polished spindle and bearing (original literature suggests that the machining tolerance for the spindle was 1/1000mm). Why two platters? It’s to do with the large motor. When starting the TD 124 from cold the motor will run a percent or so slow for the first couple of minutes and then will run perfectly at speed (possibly for ever given the size of the motor). To avoid speed anomalies (and to achieve a sort of instant cueing for radio stations) the user would keep his or her TD 124 running continuously, not switching it on or off, and raise or lower the top platter to start or stop a record whilst keeping the lower platter spinning at a constant speed. Swiss engineering…. 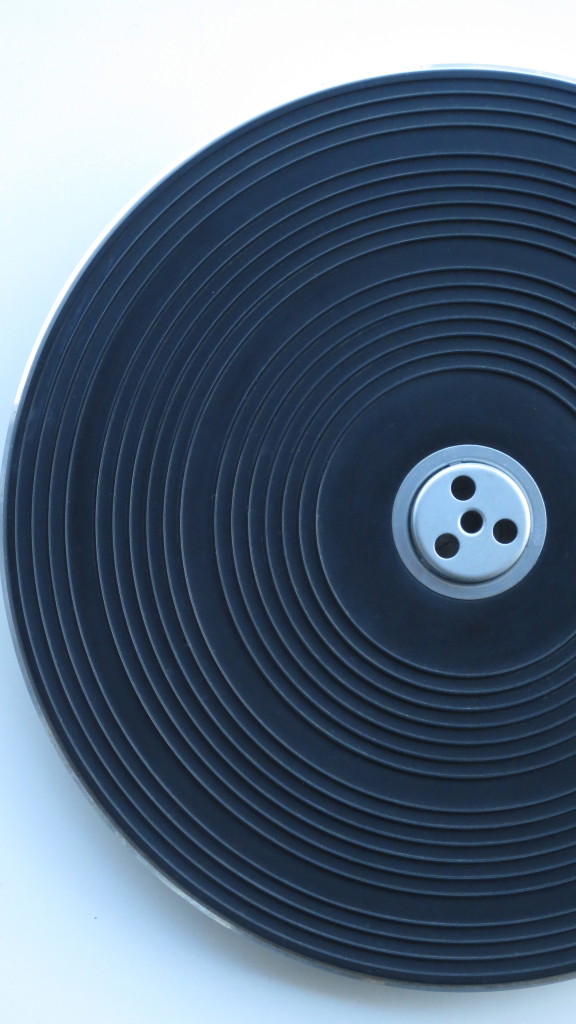 And a little more than half of the top aluminum platter…. 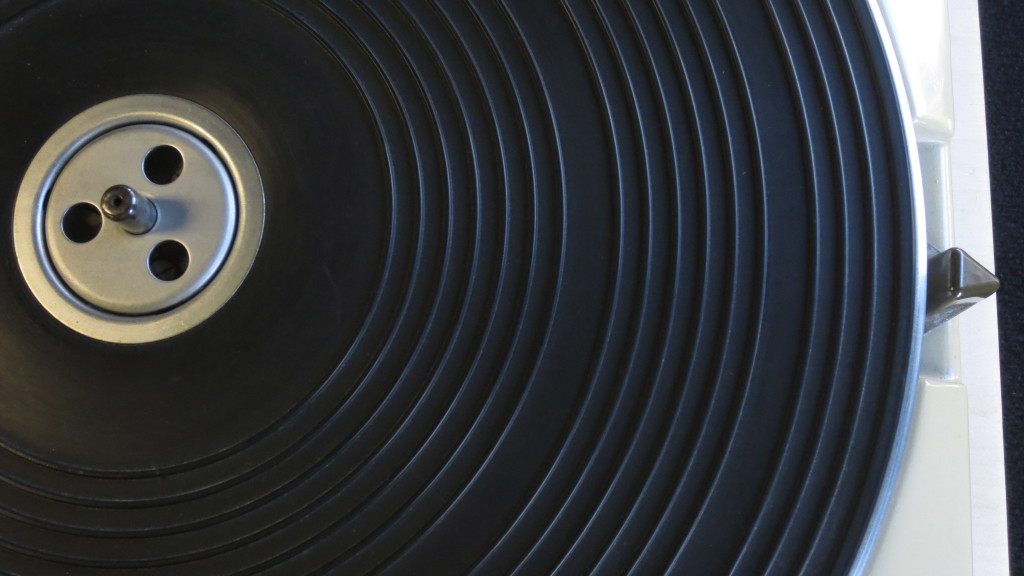 Closer view of the ribbed top platter mat, showing the spring-loaded 45RPM large hole adapter, and at the right hand edge the clutch to raise the top platter. 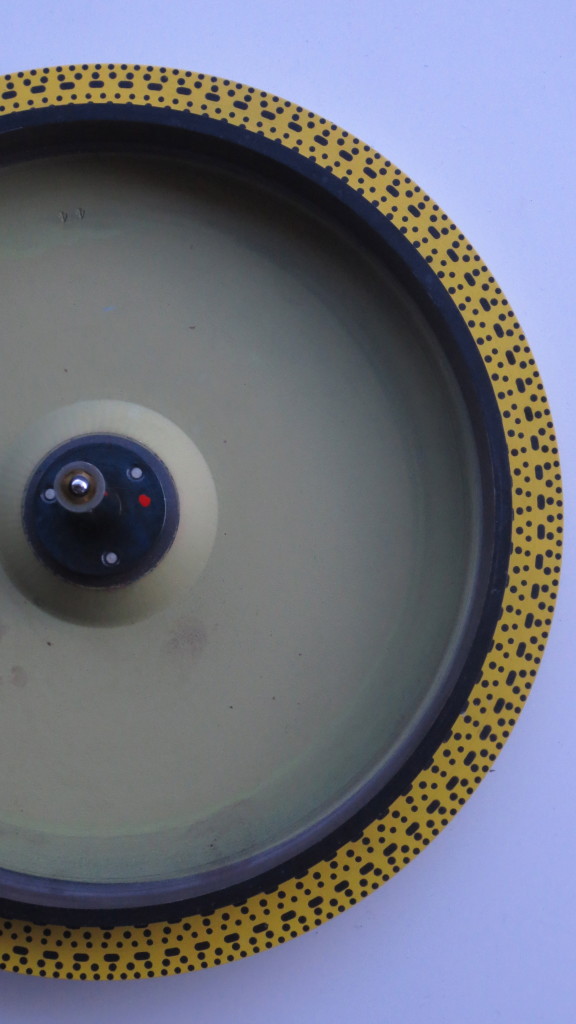 Half a beautifully machined and painted steel lower platter. The rows of peripheral dots, lighted by the built-in strobe, are viewable through the small window at the front centre of the turntable. Different spacing for different voltage line frequencies…

It is an idler drive. Detractors, and there are some, don’t approve of the idea of large motors not being isolated from platters. Fair point (kinda), and it is partially the job of the second platter to provide isolation. But this wasn’t enough in the view of the engineers at Sainte-Croix. Unlike the wonderful Garrards (301 and 401) and the big Lencos, all beautifully built idlers, the 124 uses a belt between the motor and the idler mechanism to provide even further isolation. It all adds up to a really rather marvelous turntable. Well of course it’s still revered! How could it not be. 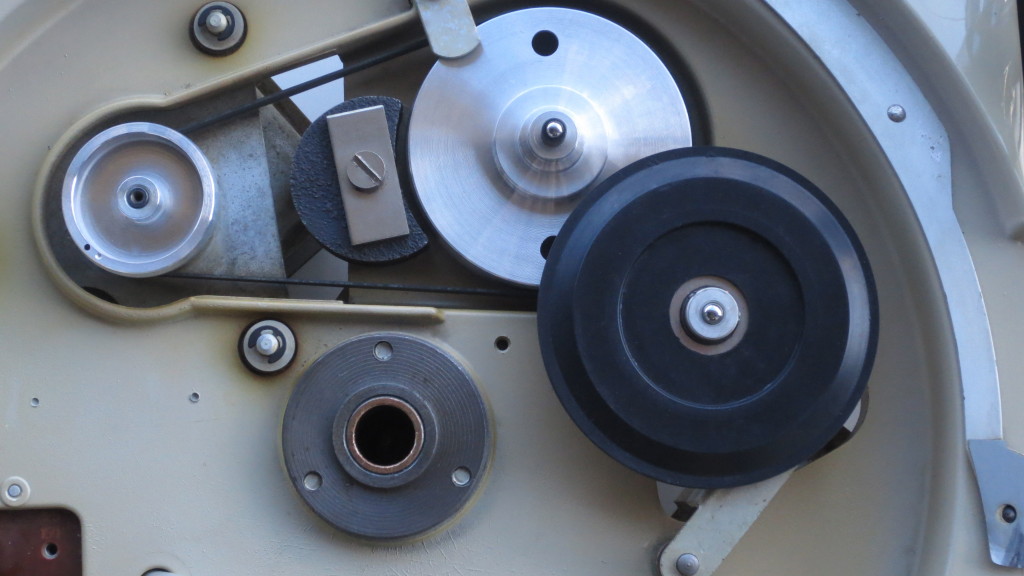 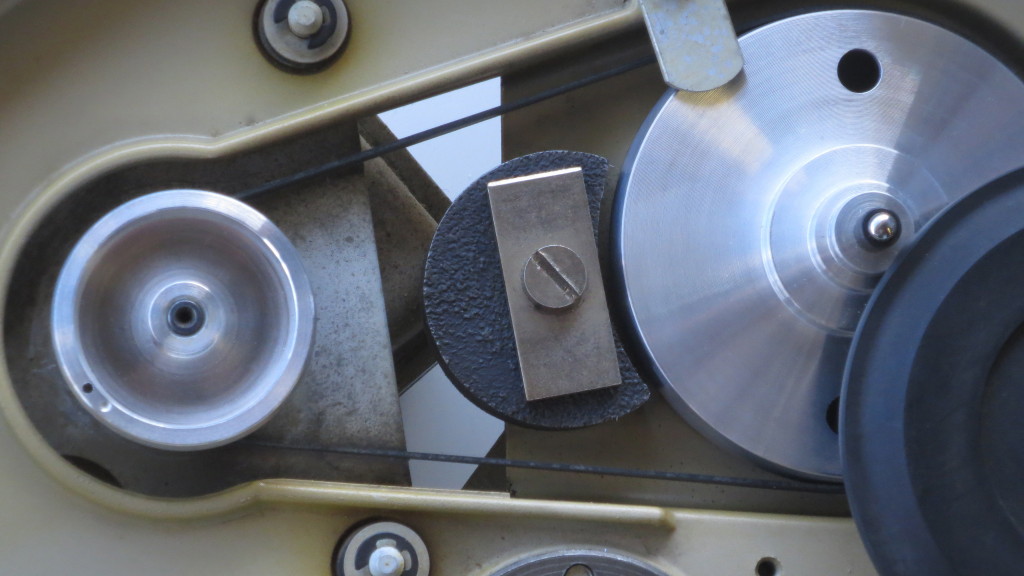 A close view of pulleys and eddy-current braking magnet. 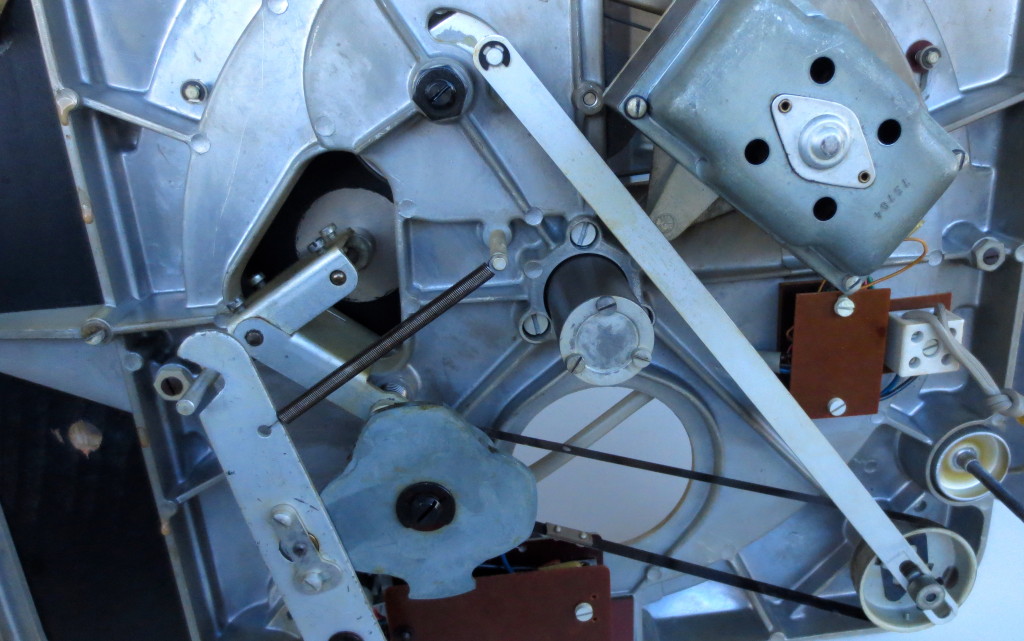 Underneath The Beast. Simple, elegant, and extremely strong. Built to last a century?

An examination of the motor pulley reveals tiny drilled holes for balance – and it’s reversible for 50Hz or 60Hz use (a lovely touch): when spinning it’s actually hard to see that it’s moving, such is the accuracy of the machining. The same could be said of the idler wheel itself. Big motor, massive platter, lovely clunky switchgear and nth degree engineering come together to produce the Thorens TD124.

An easily replaced arm board, attached in place with three heavily chromed screws, and the joy is complete.

An exceedingly rare unipivot arm, complete with dedicated Thorens armboard. The signal is conducted through the arm pillar using four small wells of mercury: excellent and highly innovative engineering, but we don’t think it will be produced again….Ah, the ’60s…..

Of course the original plinth does not date quite so well, being somewhat perfunctory and thin, but there is a veritable army of plinth makers (plinthiers?) all with their own ideas of how best to support and display the TD 124; the one illustrated is a nice stepped ply wood affair, all the way from sunny Moldova, and does its job quite beautifully. 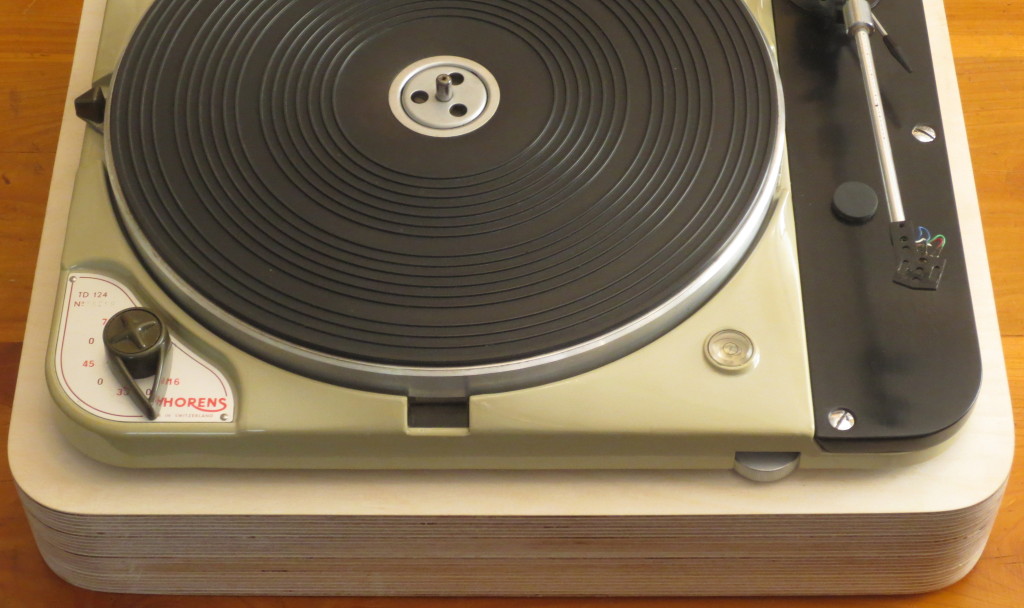 Front view showing the multiple layers of birch ply for the plinth. 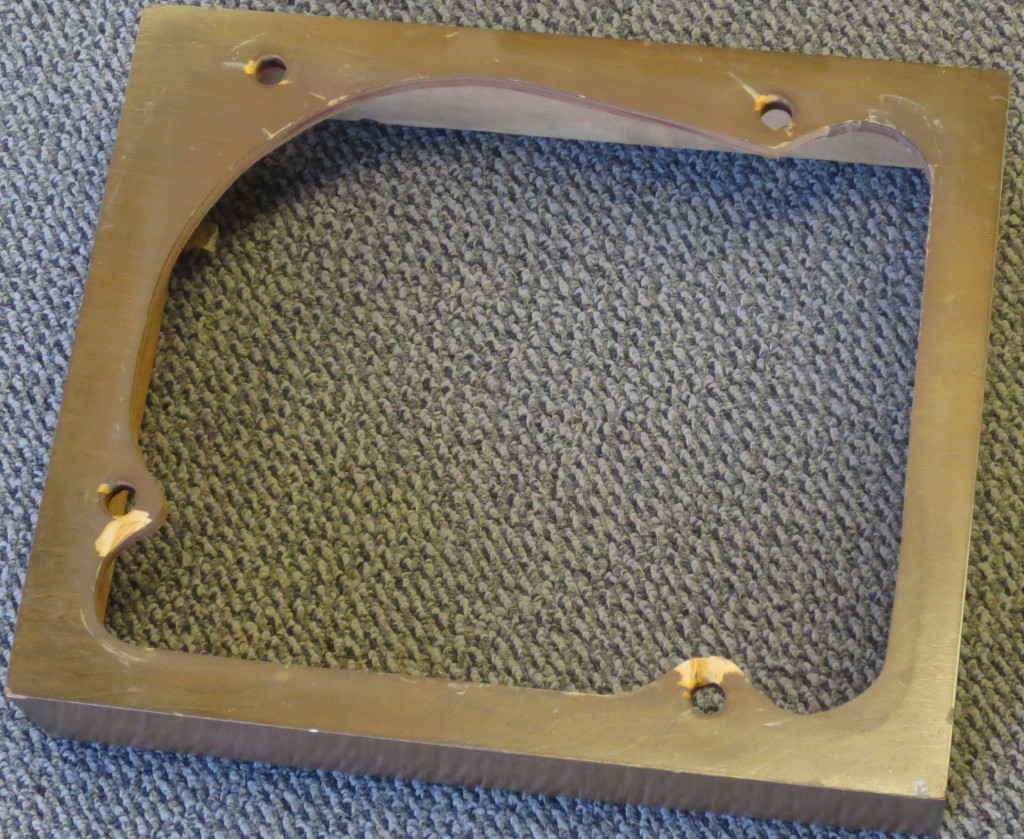 A typical original plinth. Not much in the way of real isolation and support; best improved….. 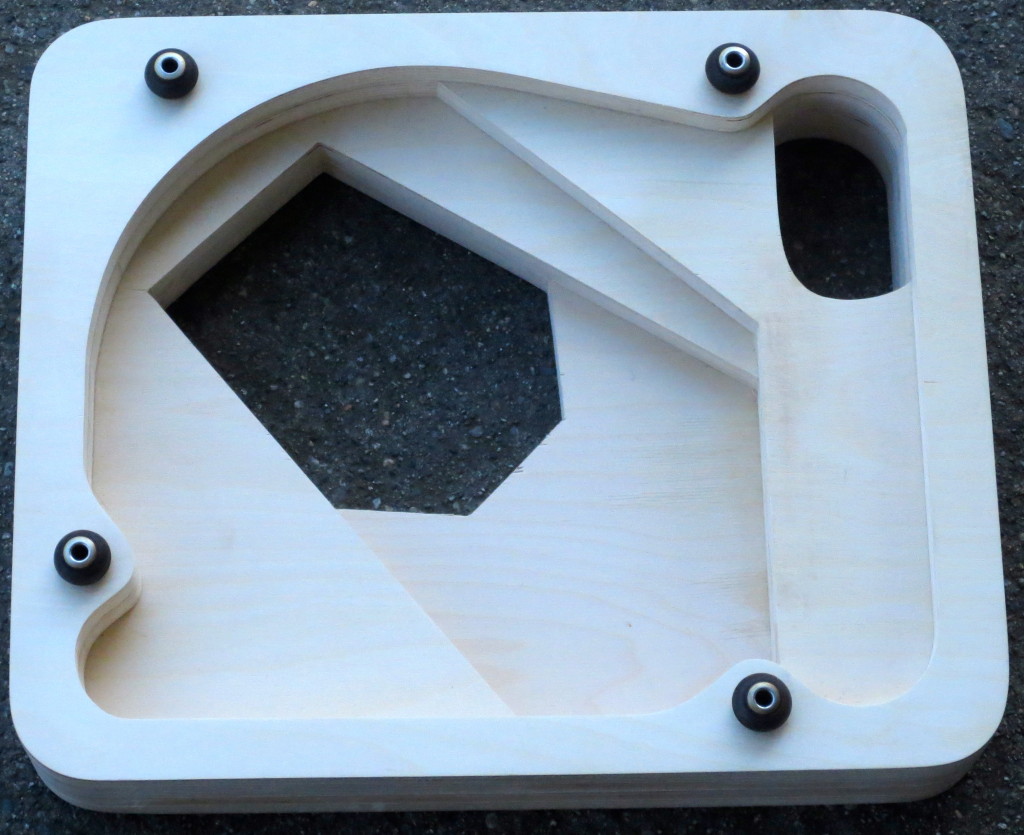 A typical replacement plinth; solid, effective, and so much better than the original flimsy box. The stepped design is designed to safely increase overall density whilst allowing for sufficient air circulation around the motor.

So, a brief peep at one of the Legends. Much, much more to write but in the interests of brevity I’ll cut it short for now. Almost 60 years old, and so well put together I suspect that it will last another 60 years. If only I’d been built by the Swiss….

Working on the TD 124 and upgrading it is relatively easy. Aside from rebuilding the motor (which requires some precise work) refurbishing the turntable is not terribly difficult. Having rebuilt some basket cases and returned them to their former glory I can say that this is one of the most rewarding undertakings in turntable-world. Using one at home (in fact I’m listening to one as I scribble) makes me once again ask how much vinyl playback has improved over the last half-century. My Quad 57 speakers date from about the same time, and it’s difficult to imagine better sound. Methinks we knew a thing or two in 1960….