Roy Orbison’s “swan song” and posthumous “Mystery Girl” finds this Travelling Wilbury at the peak of his powers. For such a modest man, he could sing with such brilliance that angels in heaven would take notice. His operatic voice was truly unique and earned him enormous admiration from fans and colleagues alike. 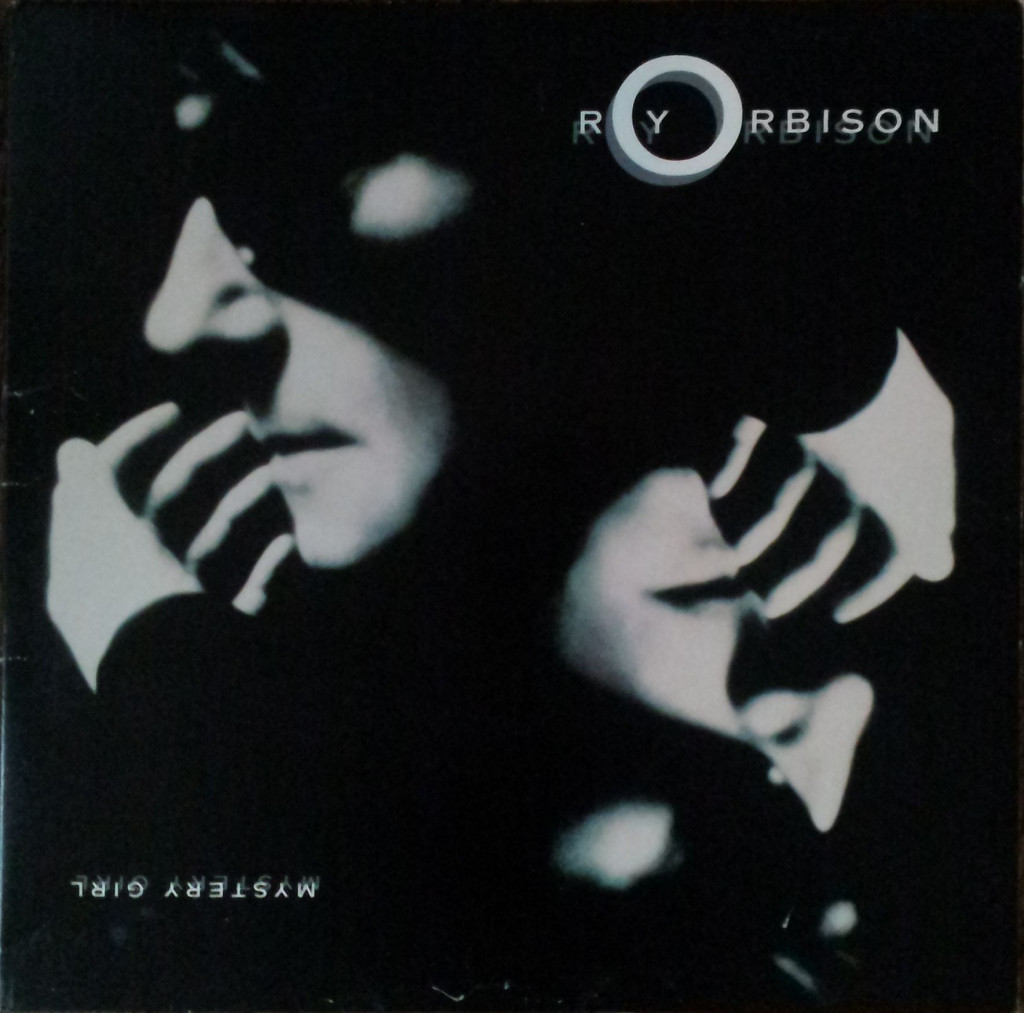 “Mystery Girl” was released February 7, 1989. A mere 2 months after he passed away from a heart-attack at the young age of 52. It was a real tragedy for both his family and his fans worldwide. Roy had been experiencing a career resurgence, thanks mostly to his membership with the Travelling Wilburys “supergroup”. Only a little over a year before, Roy had accepted what would become a fateful dinner invitation from his friend George Harrison (The Beatles). The pair sat down with Jeff Lynne (ELO), to discuss the prospect of creating a B-Side for George’s “This Is Love” single from his “Cloud Nine” album that Jeff had co-produced.

The group, who at the time were using Bob Dylan’s home studio in Malibu, California, brought Bob into the fold as well. The last piece of this story is Tom Petty who had by chance, stopped by the studio to retrieve his forgotten guitar. While there, he discovered the impromptu recording session and offered a hand. The resulting song from these five stars was “Handle With Care”.

The song was too good to be left as a B-Side, and the experience so enjoyable, the Travelling Wilburys were born. From this point, an entire album was created, harvesting the individual talents and styles of the collective group. The final product was late 1988’s “The Travelling Wilburys, Vol.1”. Recorded over a ten day period, it became a surprise success. Resurrecting rockabilly, folk, roots and laying down early blueprints for what is now modern country. It was truly a one of a kind moment in rock that was not planned but created out of circumstance.

The friendships born out of this album produced further fruitful music for each member in a solo capacity. These collaborations included Jeff Lynne, playing on and producing Tom Petty’s quintessential solo-work “Full Moon Fever” (1989), Harrison and Orbison also offered backing vocals and guitar accompaniment on various tracks. As a thank-you, Tom Petty and Jeff Lynne assisted in the making of Orbison’s final artistic statement – “Mystery Girl”.

This was Roy’s first album of all-new material in 10 years. It is a marriage between the “classic” Orbison sound of his early 60’s glory days and the modern production technics of the time. There are ten songs and six producers on this album, but the sound of it is still singular in tone.

Orbison starts off the proceedings with the Jeff Lynne and Tom Petty co-written single “You Got It” which harkens back to the Wilbury sessions. It is a straightforward and charming tune that recalls “Oh, Pretty Women” in its marching beat and sing-a-long chorus, lead of course by the man’s recognizable voice.

“In The Real World” contains lyrics that foreshadow Roy’s early passing. He sings “we must say real goodbyes/no matter if the love will live/will never die.

“(All I Can Do Is) Dream You” picks up the pace of the record again with vintage T-Bone Burnett production highlighting Roy’s romantic embellishments found on classics like “It’s Over”.

“A Love So Beautiful” follows this trend as the ballad threatens to sound schmaltzy but avoids doing so thanks to Orbison’s delivery, sung with conviction and sincerity.

“California Blue” closes out the first side with another Orbison-Lynne-Petty venture.

My favourite cut on the record, starts off Side 2 and was a gift from a pair of artists experiencing a massive amount of popularity at this time. The song “She’s A Mystery To Me” (which influenced the title of the album) was crafted by U2’s Bono and The Edge while working on material for the band’s “Joshua Tree” follow up “Rattle And Hum”. Bono had been inspired by Orbison’s “In Dreams” song and as a result the two men began fashioning a track that Bono called “Pure Orbison”. After a show at Wembley, Orbison met U2 backstage where the song was presented to him. Roy liked the song so much that the three musicians continued refining it and eventually it became the focal point of the entire album. Produced by Bono and featuring Edge on guitar, “She’s A Mystery To Me” speaks to the heart and like U2’s “With Or Without You” delves into the themes of intense love. The lyrics are symbolic and leave the listener emotionally involved with our protagonist.

“The Comedians” finds new-wave rocker Elvis Costello joining the party with his superb song contribution that may have been written as far back as 1984 during Costello’s divorce drama.

“The Comedians” is a wonderful match for Orbison who delivers a strikingly visual display of betrayal and loss, the very subjects Roy seems to understand more than most.

“The Only One” and “Windsurfer” had some help by Roy’s wife Barbara who contributed backing vocals to the “Big O’s” tail-end tracks on the album. Orbison, once again, exquisitely detailing stories of love that speak to the heart of the listener.

“Careless Heart” closes out the album. It conveys in its final moments, a sense of sadness due to the early passing of a rock icon and memorable entertainer.

Many of Roy Orbison’s peers have stated that his voice was one of the greatest and most distinctive ever heard. He was always humble and displayed a quiet vulnerability while performing. Standing still on stage, he would beckon his audience closer to him but remain aloof.

Famous for wearing dark shades and black clothing, he is sometimes referred to as the “other man in black”. “Mystery Girl” is Roy’s last offering in a career that has spanned a number of decades and provided many memorable moments.

Do yourself a favour and check it out.