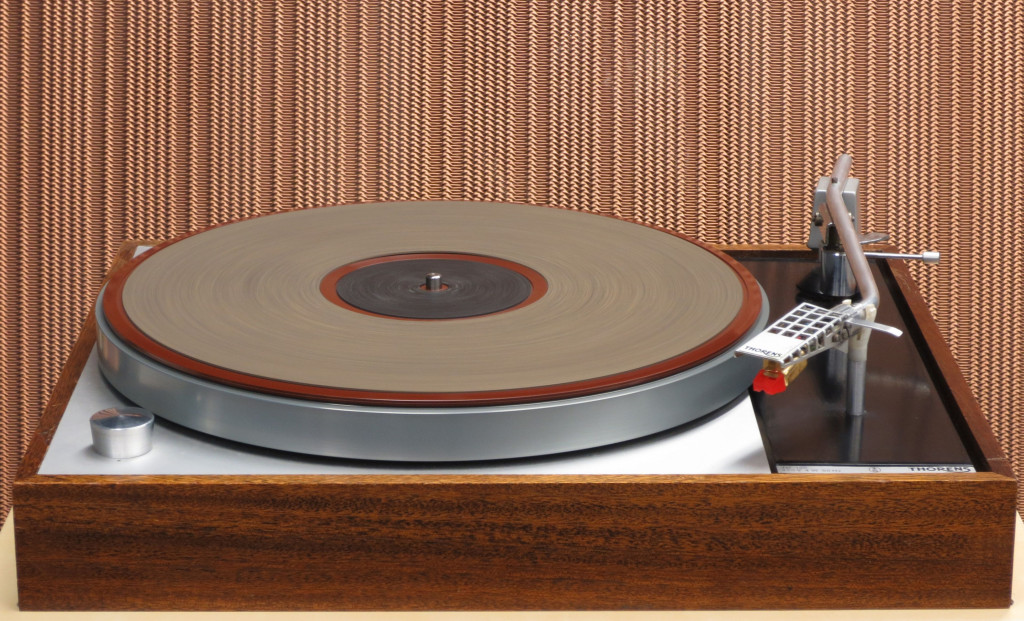 When Thorens and Garrard were duking it out in the early 60s you had your choice: in the German/Swiss corner was that marvel of precision engineering, the workhorse of radio stations ands recording studios, the TD124. One of the most beautifully built idler drive tables ever conceived, and just so German; no one else would have added a belt to an idler drive (situated between the the idler wheel and the motor, and whose sole purpose was to isolate the platter from the really rather minor vibrations of the motor). The 124 has a permanent seat at the adult turntable table; used prices reflect its coveted status, reaching into the $1000s for a rebuilt example.

Just as desirable, the Garrard 301 (and later the 401) are just as well made, and prices and performance are both extremely high. Whilst not quite as pretty (arguably) as the 124, the superb engineering of the Brit table, and its sonic qualities assure that it will always be top of the pops for some. The devotees of both these classics will swear that nothing’s better – and for any money.

But then a strange thing happened: in 1965 Thorens introduced a cheaper (by far)  table, with a simple belt drive, and called it the 150. By current standards the Thorens TD150 turntable  is tiny; just big enough for a 12″ platter, and an arm that looks, well, small, simplistic, and decidedly un-German. In fact, the arm looks rather crude, the kind if thing we might associate with a cheap effort on the part of a maker from another part of the world.

Used prices can reflect this overall appearance: a tatty but working unit might be had for as little as $50, and regardless of how much effort you put into buffing it up it will never look like an expensive turntable. Unless of course you re-plinth it, re-arm it, and then you’ll have something to impress the neighbors….

So what’s the fuss?

Simply this. In my opinion, after restoring three of these little vinyl spinners I would go as far as saying they deserve the award for the the most underrated turntable of the last 50+ years (no doubt the original AR should share the honor, but that AR arm….) Yep, they look just a little homely, even tarted up and dressed with a new mat, but in the world of sheep these are some serious wolves. 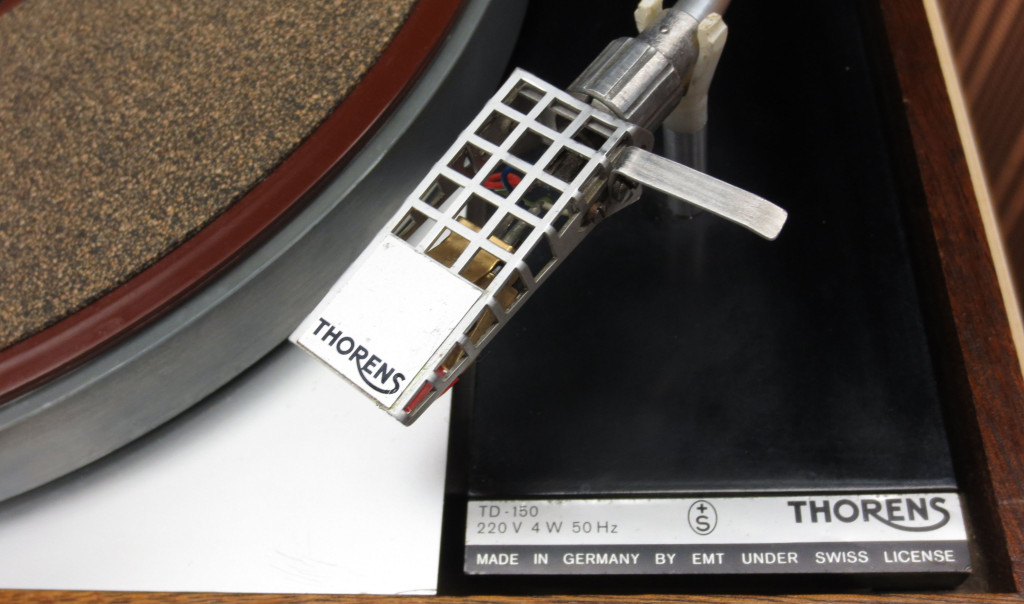 Examining the 150 is rewarding. Back in the 60s Thorens just didn’t have the know-how to make a bad bearing; cleaned and relubricated, to spin one of these heavy (3.4kg) two part platters is to be reminded of what Swiss engineering means. Tolerances were extreme – ‘good enough’ in German or SchweitzerDeutsch was just another way of saying “just you try to make it better”, and even after five decades of use the way the inner cast platter slowly slides into the spindle well commands respect. The motor, a relatively simple synchronous device has enough torque to get things up to speed surprisingly quickly, and that speed is utterly stable: it well should be, as the two-piece platter is seriously heavy with a lot of mass at the periphery. Tossing out the original mat is not the worst idea; the marketplace is full of worthy replacements, and having done that we can turn our attention to the TP13 arm (or the later iteration, the TP13a)

To call either arm crude is actually unfair: they’re certainly both minimalistic, with the later version featuring anti-skating via the ubiquitous pulley and weight system, but both arms work surprisingly well. The later kugel (German for ball) version has the added luxury of an outboard cueing system, and this makes the needle-drop almost a pleasure. In either case, as long as the bearings are clean and adjusted friction levels in both vectors appear extremely low, so all is well here. In my examples there may be just the slightest degree of play (down-playable with some careful effort) and so we turn out attention to the headshell. This is no simple affair. It allows for adjusting stylus rake via simple locking screws and this one feature immediately endears it to the tweakers like me. Those Swiss engineers and designers weren’t loafing… 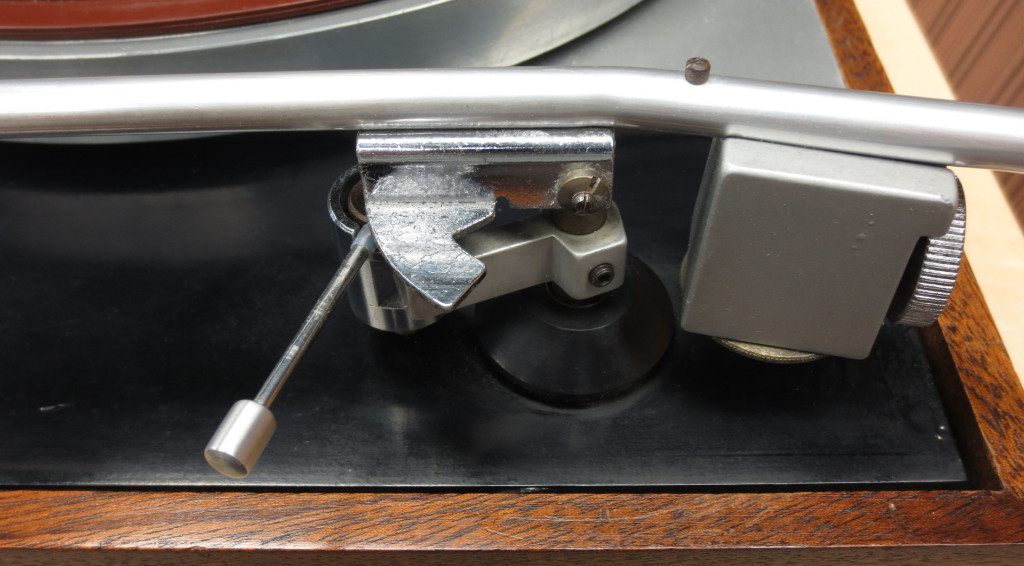 Looking at the underside reveals a classic three-point suspension, and this is the heart of the TD150. Using foam-damped springs (these foam bits can deteriorate and many users simply get rid of them, attributing sonic improvements to this) examining the TD150’s underside is to take a peek  into the future. For the humble 150 (and its American stable mate, the fabulous AR turntable) was to signal a complete pathway for countless designers over the next few decades. The concept of a suspended table, where not only the motor is isolated from platter and arm, but also from stamping feet, is seminal. Linn, Ariston, Fons, etc etc, later took this concept and flew with it, and the Great Turntable Wars began in earnest.

Yes, adjusting the suspension can sometimes be a persnickety process, but it’s not nearly as hard as some would have it, and once adjusted, the temptation to bang the shelf the table sits on (and hear nothing through the cartridge…) is irresistible. It just works. Very very well. Putting a typical medium to high compliance cartridge on the arm and listening to this little fellow is to (once again) wonder if money is better spent on records than equipment. Putting on some torture tracks from a variety of test records reveals that the TP13s, either iteration, do just what they should, and the music flows with assurance and ease into my beloved Quad 57s.

Obviously I could write more about the details of the Thorens, but this is not a technical manual, just a hymnette of praise. Just one thing: if you see one for $50, and it’s got all its bits, buy it! For the price of a re-issued double album the absurdly undervalued TD150 is absurdly good.

PS Yes, I know I missed out the Lenco, but this really was supposed to be about a belt-drive….

4 thoughts on “Thorens TD150 Turntable Review – The Most Underrated for 50 Years?”